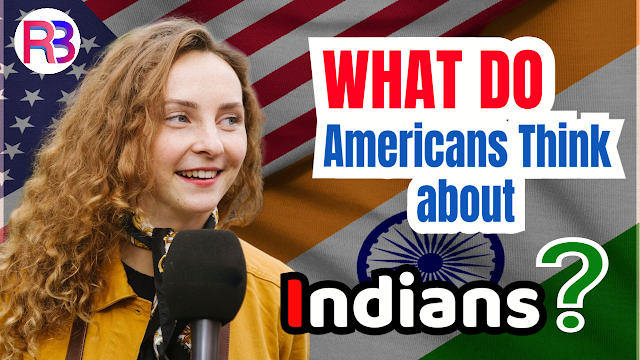 Hey, all, welcome to Reporterbuzz. I wrote an article about the reaction channels a long time back and how many non-Indian YouTubers have figured out a way to make it easy by reacting to a song or video and mainly saying over-the-top and nice things about us. The exciting thing about all this is that the number of viewers and subscribers is very high for the channels run by the richer countries. Americans happen to be on the top of this foot chain, where there are 1000s of YouTube channels making this lucrative market. Now the root cause of all this is that people are trying to seek validation. The sad thing is that they're not seeking validation for the content they create but for the range of their favorite actor or performer or some kind of video they like.

What Americans think about Indian:

Based on our 15 years of experience living in the US, we try to explain what they think about India. But before I get started, a gentle disclaimer "this is just purely based on our own experience, and our intention is not to judge any community." we'll straightforwardly say things as observed, and what you make of it is up to you. The United States is a vast country. Depending on the place you live in, your experiences as an Indian may be different. Now let me touch on the demographics of the country. Little white Americans dominate in population, business, and popular culture. Black Americans are generally poor and still face some form of racism. They have a great presence in sports and popular cultures like music and cinema. Hispanics, who form the third largest group, are originally from South American countries. They are the blue-collared workforce of America and have a decent presence in American pop culture. We should not forget the indigenous people of America, who call us Indians, but they are technically Native Americans.

All of this is followed by Asians and Indians, not that when they say Asians here, it is Chinese, Koreans, Japanese, Vietnamese Filipinos, etc. Now Indians, Nepalese, Pakistani, Sri Lankans, Bangladeshis, etc., are all grouped as South Asians Indians are a very small portion of this entire population, maybe around 1.2%. Despite the minuscule percentage of us in terms of people, we're way ahead of other demographics in academics, political clout, family income, and business. But the topic here is what Americans think about Indians and Indians. When I say Americans, I will be referring to the second and third-generation Americans who were born here and lived here for most of their life. Firstly, Americans care less about keeping up to date on World Affairs. And as they have a lot going on in their own country, especially in recent times. For instance, they would care less about knowing any country's GDP. In fact, they would not even know what a GDP is as they know they are the richest now, right? When you say that India is partnering with us and other countries to counter the big countries of threats like China, they will look surprised or don't care much about it. In general, they're aware of more significant countries and all outsourcing stuff but don't see India as a major partner in countering threats like China. Their worldview is elevated in many European countries due to cultural similarities.

What's interesting is that Japan is one country Americans are fascinated by due to its advances in electronics, robotics, automobiles, and fascinating food culture. Any average educated Indian would keep up to date on world affairs as most have a culture of reading news daily. Also, Indian news media feeds national and international news consistent Now, one may ask if we care about Americans giving importance to India, frankly speaking, it doesn't make any difference, but some food for thought, when our Indian Prime Minister visits the USA and spends time with the US President. The major news channels, NBC, CNN, Fox, and others, have zero coverage. Seriously, guys, nobody covers that. And the common man doesn't even know that our Indian pm was here.

On the contrary, when the US president visits India, our new channels talk about nothing but the visit, right? So something to think about. the second aspect that Americans think about India is outsourcing. That's a big one. American corporations have been using outsourcing as a default cost-saving option for outsourcing it and other IT-enabled services to India. 10 to 15 years ago, when the jobs started getting replaced by other countries, Americans started suing the corporations for laying them off as to continue to work would often complain about the quality of work that happens in India over the years as Indian IT firms started investing in training their employees and started doing significant projects. Corporate America has indeed come to terms with the reality. I must say that despite all outsourcing, the job market in the US has never looked better. The problem is there are not enough skilled workers that this country produces because many kids who pass out of high school are not going to college for many reasons. Hence, there is a desperate need for engineers from countries like India. I think corporate America has come to terms with India being a major outsourcing destination and IT service provider. They need to have enough skills to stay in the job market.

The third aspect is India's popular culture. Popular culture, as perceived by Americans, is that India is all about music and dance. Not a single American I know has told me about watching an Indian Movie oriented show. Even though there is a plethora of content on OTT, the British, Japanese, and Korean shows and movies are well received here, but Indian content doesn't sell well here. They only experience some Indian content when they go to an Indian restaurant, where most don't even bother watching or listening. This is a real difference. It is not that they are arrogant or self-centered. It is just because there is a day and night difference between their tastes and the content we put out in India. The fourth is what impression they have on India. Here's the deal, friends, most Americans who have been to India have either good things to say or mixed opinions. I have not met anyone who would say they were in India and had a terrible experience. Now the problem is that most Americans have not traveled to India in their lifetime. Many of them don't have it as a preferred vacation destination due to many bad things they might have heard about India and the media, and one of my coworkers said to me, the ones that he would love to go to India, but he's afraid of falling sick. This is a genuine concern as they don't get exposed to as many germs as they would be in India. Therefore, they typically take multiple vaccinations before entering India because data suggests they get sick whenever people from countries come to India without vaccinations. Yeah, women are generally discouraged by their families to travel to India as women's safety issues have been discussed consistently in American print media whenever news comes out.

In summary, this is a big issue, right? It cannot be brushed off as safety and cleanliness are equally crucial to people staying in India. So something to seriously think about. The fifth point is Indians are nerds. Yes, along with Asians, Indians are considered nerds. Being a nerd is not all that bad, right? Indian parents go all out to make their kids excel in academics so that there is no stone unturned to make them excel in their careers and life. This applies to first-generation Indians who typically raise their kids to be very good in academics and not bother much about sports and other community activities.

On the contrary, American upbringing is an appropriate mix of sports, academics, and extracurricular activities. Because of this, you can see a massive disparity between Indians and the rest of the communities regarding getting a college degree or even a Ph.D. The Asians are fairly successful too. Unfortunately, Indians don't have a sports culture. Cricket is not the only game out there, right, and the kid should be encouraged to give the best in the kind of sports that suits them. Some sports require intense physical activity, which is vital for kids' mental and physical health. There are many more stereotypes Americans have about Indians, like an arranged marriage, extreme poverty, Sathu smoking weed, snake charmers, and the Taj Mahal is the only thing that exists in India. Some of you might argue why we care about what others think about us, specifically Americans. Firstly, it matters for many people and me outside India.

Hollywood portrays Indians based on the popular stereotype in the US, as these movies are watched by people from other countries. This is what they start thinking good news is no one portrays Indians as harmful or antisocial, which is not entirely true. When was the last time you saw an Indian guy play a gangster in an American or a British entertainer? Right? So the bad news here is that they would never portray us as highly influential risk-takers. At best, we are shown as people who like mundane jobs like taxi drivers are someone who runs a gas station, even though a large proportion of students pursuing various technical courses and the vast majority of technology-based companies have Indians in different critical positions. We have a lot of Doctors also, right? In general, there is a huge disparity between the stereotype and the reality of Indians in India.

Please comment on what your thoughts are on this topic. And thanks for the privilege of your time. See u later...