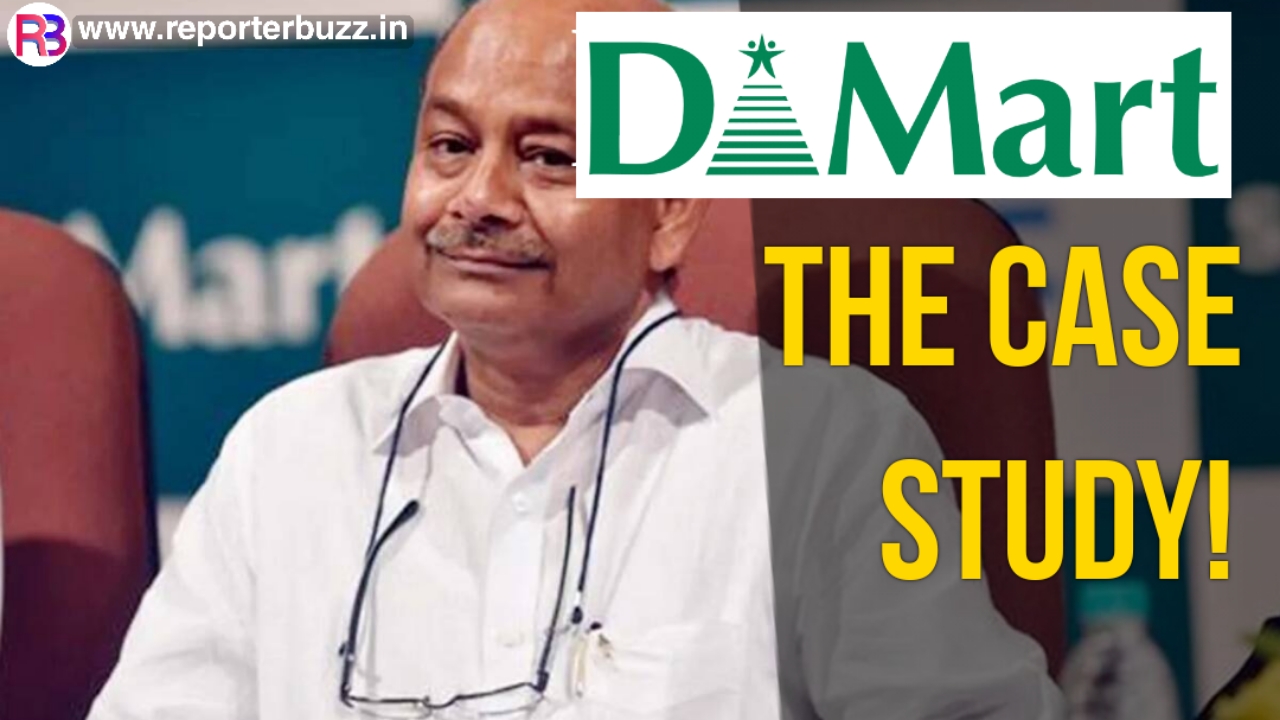 Hi friends. In this article, we will discuss a fascinating case study about the most talked-about company in India today, which is D-Mart. Where other supermarket chains are struggling to survive struggling to make profits. D Mart consistently makes profits and grows each year at a rapid growth rate. Now how is D-Mart doing that? That secret we will find out in today's article, and let's get started.
D-Mart Case Study


D-Mart is a supermarket chain started in 2002 by Mr. Radhakishan S. Damani in Mumbai. As of now, D-Mart is located at more than 200 locations. When the company came out with its IPO, its valuation was around 40,000 crores. It is over 1.5 lakh crores and the projected growth rate at the time of the IPO was about 40%. D-Mart is a one-stop-shop for all our everyday needs like groceries, apparel, footwear, and many other small products. What is the overall strategy? Let us discuss first, and then we will get into the details. D Mart always believes in offering its customer the best price, and it keeps all products of all the major brands. It is generally located in high-traffic areas. And D Mart has three sizes of stores. By default, D Mart opens massive stores in big sizes. There are three categories of hyper stores, express stores and super ones are the largest Express is the smallest, and hyper are the mid-sized stores of D-Mart. D-Mart targets mainly middle-class customers, and 90% of the demand stores are cell phones. D Mart owns a property of maximum of its stores to avoid the monthly rentals, which increases the company's asset value every year. D-Mart makes the vendors faster payments, and D-Mart invests less when compared to other competitors in the marketing costs. So this is the overall strategy. Now let us get into the details and understand how is the market better than other companies. And in this case, the study is not just from an investment perspective. From a business perspective, you will also learn many things and implement them in your own business.

The secrets of D-Mart's success:

Mr. Radhakishan S. Damani is a value investor like Warren Buffett. He believes in investing and having a long-term strategy. He has chosen a unique model in running his business where all the other brands and stores generally take property on rent and open their shops. D-Mart believed in buying the properties having a long-term vision for seeing where they want to open the store in the future, and purchasing that property right now. For cheap and in future opening stores at prime locations. Mr. Radhakishan S. Damani believes that there are no shortcuts to growth. He has grown slowly initially but profitably, so he always had a long-term vision.

The other companies believe in taking loans and growing fast as soon as they succeed in one or two stores. But D-Mart consistently opened the stores only when the earliest store was profitable. They started small with fewer branches, and they were not hiring in the expansion. They made a profit in every store, and they have been consistently profitable in all the stores which they are growing in their expansion phase.

D-Mart has maintained a healthy relationship with all its vendors. That is why the vendors offer D-Mart faster service, better service, and a lot better prices when compared to its competitors. It also values customer relations, which is why it tries to offer the best service and the least possible cost. They also love their employee and other stakeholders relations.

D-Mart sells daily used products at heavy discounts. It always tries to sell all its products below the MRP, paying its vendors faster than its competitors. Even if the vendors have a standard credit period of one month, D-Mart pays its vendors faster in just a few days or a week. So, they had faster payments built a lot of credibility with their vendors, and the vendors were happy to offer the products to demand at meager prices. So, this makes the purchase cost less in retail. All the products are MRP-based, which is why everybody is selling at the same MRP price. So, there are only there is only one way of increasing your profit margins that are by reducing your cost. So D Mart excels in this by reducing their cost. How are they reducing their cost by buying from vendors at meager prices, avoiding rentals, and lowering the marketing costs? They have increased their profit margins despite giving discounts to the customers. The next secret here is to focus on local markets. Generally, the other supermarket chains focus on big brands popular across India.

But along with those big brands, D Mart focuses on the local requirements and the customers of that particular city or state. Initially, they opened stores only in the western part of the country. Gradually, as and when they develop better relationships with the vendors and better customer understanding, they are slowly expanding to the other parts of the country. So they also keep regional brands rather than national brands. Some brands are popular locally in that particular city or state. T Mart also makes a point to keep those retail brands so that the customer doesn't have to go to this mall Kirana stores to make any purchase.

D-Mart has always focused on providing the best price to its customers every day for all its products. The focus was entirely on the USP. They did not encourage many showoffs or any kind of decoration in any of their stores. The next secret is they did not follow the crowd. Mr. Radhakishan S. Damani focused on their own business. They did not worry about how their competitors were progressing. Many companies that came before and after or together with D-Mart grew very rapidly by taking a lot of loans and having great expansion plans. But D-Mart took to its business model. And it grew at a very stable place. There were a lot of companies who jumped into e-commerce and made losses, and even now, they are making losses. But D-Mart, until they were very sure they did not enter into e-commerce and recently they are steadily getting into e-commerce.

not just for demand for other brands, but this is an additional advantage to D-Mart whenever somebody wants to sell anything to the big supermarkets. Since the supermarkets have a lot of stores, it's a chain concept. The brand which intends to sell any product in the supermarkets has to pay fees like an entry fee called slotting fees. So, when it says that, only they allow those products of that brand to be sold across the country in all the branches of that supermarket. So, this gives D-Mart an advantage and additional profit despite getting the discounts. Another advantage is that this becomes an extra earning base, which offers the mart a more significant advantage than its competitors. So, these are the secrets to which D-Mart success is defined. Now, coming to the stock fundamentals, D-Mart, presently called a venue supermart, is trading at a price of about 2300 despite the market crash. It is selling very high. The 52-week high and low is about 1200 to 2500 rupees. The market capitalization has grown to one lakh 56,000 crores of rupees. The Price-earnings ratio is very high now at 122. Industry P/E at 86. The earnings per share are 19.54, and the price-book ratio is 27.77. Revenue as of March 2019 is 21,827 crores which is a good number, and the company is profitable and is Earning sufficient profits if you see it has earned 936 crores of profit in the year ending March 2019. So, the company has solid fundamentals. Another advantage is a promoter stake is 77%. Mr. Radhakishan S. Damani owns a majority stake in the company even now. The track record of the promoters is solid as Mr. Radhakishan S. Damani itself is a brand in the market. New companies like Flipkart are approaching D-Mart to have collaborations and partnerships to grow their business. Mr. Radhakishan S. Damani is the only tycoon whose wealth has grown up even though the market conditions are going down. The other competitors like The Future Group have about 1300 stores, and other competitors like reliance have much higher stores when compared to D-Mart. But per store profit, if you see, D Mart is earning much more than its competitors, and many competitors before D Mart started like Subhiksha. All they have come and shut down in this kind of market. D-Mart has come up recently, and it has been earning a lot of profit and growing steadily. Faster growth in the future as more cash flows come in for more stores. Since D-Mart is going very fast, it has opened a lot of stores, all these stores will earn a lot more cash flow, and this cash flow will help grow the company even faster as the company goes forward. So, there is a double advantage or a very unique strategy of D-Mart if you have observed the least price for the customers plus the highest profit for the D-Mart. Generally, if any companies offer heavy discounts to the customers or the least cost, they cut their margins and provide. Still, D-Mart is offering the least price despite earning good sufficient margins. That is why D Mart's model is very unique.

After studying this case study, I leave a question in your mind, and I want you to answer in the comments whether D-Mart can become the Walmart of India by looking at the case study by understanding the uniqueness and looking at the fundamentals of the company and their growth plans? I want you to come up with an answer and comment below and let us discuss whether D-Mart can become the Walmart of India. So this company has enormous potential and a bright future, and there is going to be a good scope of appreciation if you invest in this company. This is not a recommendation, but this is a case study that we are discussing. Based on our case study, you can decide whether or not to invest in this company.

Hey, all, welcome to Reporterbuzz . I wrote an article about the reaction channels a long t…