Karan Johar's Students vs Normal Students, which is better?

Hi, friends welcome to Reporter Buzz. My name is Arnav. Today, I will tell you about how college and school life is depicted in Indian Cinema.
In general, Every language has made movies showcasing college or school mates meeting after a long time and nostalgically recalling all the silly things. They did during those immature years. In other cases, They're coming of age movies that showcase the characters at various stages of life while in college and After the college.
Astonishingly engineering College days have been the main focus of most of our industries due to the massive influx of engineering colleges across India. Over the years and the fact that many of these filmmakers themselves also might have had an engineering background and hence We're able to make compelling and relatable stories.
Telugu cinema Notice start with the 2007 Telugu Cinema 'happy days' must have been a first of its kind in India showing the life of engineering students as to reality as possible. Sekhar kammula, the director of the movie himself from an engineering background, already went through the drill and was able to make a movie that was so relatable to the youngsters back then. There It gives many big-budget entertainers of those days run for their money. 'happy days' tells us a beautiful story that examines the lives of 8 friends through their four years of engineering course. Each one of them joins the college with their own set of vulnerabilities, idiosyncrasies, eccentricities beliefs and ideas. It starts as a journey of individuals lonely becomes a collective one over time. 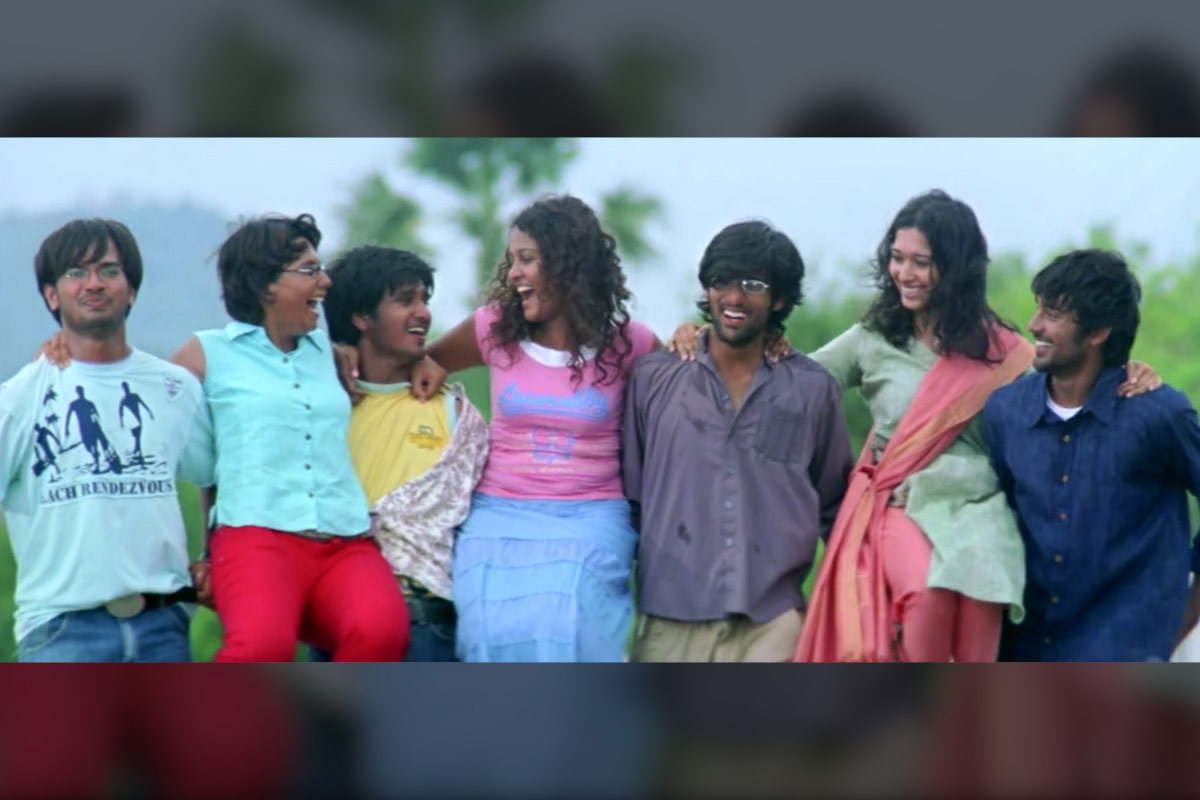 They Bond over as they go through intense examinations, bullying seniors, stringent professors, over-the-top celebrations, love, betrayal, sacrifice, every other possible emotion that an individual can experience in a college. So the movie portrays the mindset of typical engineering students which helped youth to connect with the characters involved.
Hindi Cinema
One of the iconic movies 3 Idiots, which was inspired by Chetan bhagat's 'five point someone'. Get the spirits of it's on until the last scene while there was a love immaturity ragging and fun. The core of the movie was still about learning and seeking excellence in it. While Aamir khan's 'Rancho' character was too good to be true that character glued us to the Silver Screen through emotional Goosebumps moments at different stages of the movie. Raju Hirani, who is the master of showcasing Over-the-top emotions sprinkled with the right amount of sense of humour, played his masterstroke here too. When Farhan Qureshi is played by Madhavan and Raju Rastogi played by Sharman Joshi set aside their personal life in search of their friendship, It seemed believable. While Pia's eloping from her wedding function seem like a line straight out of the 80s Bollywood movies. Rancho's Flawless super-smart character had so much going for him to be the mega-magnet for all the characters.
3 idiots is a massive hit in China and other Asian countries bringing more Laurels to the movie in general likewise, the 2019 movie 'chhichhore' directed by Nitesh Tiwari who himself is an IITan presented us with a right mix of facts and fiction in the movie that was centred around hostile Wars in this Elite Institute. The character assesses out seem very real yet entertaining—late Sushanth Singh whom himself had incredible academic records in his personal life. Naturally, Fit the bill without overplaying any part of This role. The Sushanth played the character Anni, and Shraddha Kapoor played Maya. At the same time, this movie starts with Raghav Anni and Maya's son attempting suicide for not being able to crack the IIT exam. This was a compelling reason for their old College friends to meet up to help out on whatever they could to save the teenager's life.
Tamil CinemaThe Tamil Cinema '96' directed by C. Prem Kumar was a threat of fresh air and the subject of reunions, this time. It was a high school reunion as opposed to engineering. The film revolves around two High School sweethearts Ram and Janu from the batch of 1996 who meet at the reunions 22 years after they parted. The rekindling of the old Sparks said tone for a straightforward its honest story told with much emotion and some beautifully crafted scenes.The key takeaway for me of this film was how the characters played were Vijay Sethupathi and Trisha carry the baggage of nostalgia-filled with Bittersweet emotions effortlessly. In this date and time, it is hard to recall the storyline of a movie after a week or two. The painful feeling of the two sweethearts parting their ways in this movie 96 makes it a very memorable experience.
Malayalam Cinema
Talking about Malayalam Cinema, 'Premam' was a coming-of-age cinema directed by Alphonse Puthren. Nivin Pauly plays George David courses along with love as he grows up from a teenager to a man. As a teenager, George is nervous scared unsure of his love dabbling in vague ideas to present himself before the girl He loves played by an Anupama Parameswaran. Towards the end, He turns out to be a baker with a burning temper, eventually finding a life partner.
Alphonse Puthren, himself has an MCA background didn't find it hard to include the programming language class where a lecturer shown struggling to explain the concept of java and the fun students have during these sessions Forbidden Love the develops during the second phase between George and Malar played by Sai Pallavi. Whom is the teacher has been picturised flawlessly with simple facial expressions and body language of the lead characters? Like what we experienced in Tamil movie 96, what remains at the end is the harsh reality that Malar and George couldn't reunite.

2016 Kannada Cinema 'Kirik Party' was a coming-of-age cinema, just like Premam. The movie was directed by Rishab Shetty and starred Rakshit Shetty, Rashmika Mandanna and Samyuktha Hegde. Rakshit, who had an engineering background, wrote the script himself. The movie is about Karna, played by Rakshit Shetty.Himself. It reflects his life within his years in college from being an adorable cheeky first-year student to becoming a name that brings fear in all. The films see varied Hues of the student's character and Rakshit does a commendable job. What is more impressive is a risky plot that the Creator's finalised on. Firstly the female lead character Saanvi played by Rashmika meets with accidental death, and there is a profoundly touching subplot involving a prostitute and a newborn child.
Audience laughter this movie wholeheartedly and made it a huge success. But friends, all the film as mentioned above are a mix of facts and fiction. It is either from someone's personal experience in obviously, none of these movies is perfect. They all took cinematic Liberties to exaggerate certain aspects of their own student life. The reason these movies connected so well with the audience is that they had the heart and soul in the right place.
Now switching to Karan johar's version of high school life.

Student of the Year:

Friends, Having what some of his movies on and off before, I knew his format in general. Student of the year part one is a quintessential Karan Johar's film. If your briefs through Karan's movies, you can realise that he wants to keep away from the real India that deals with the day-to-day Source of Life. His word is generally in the middle of a coniferous forest precisely chosen to who his NRI or the elitist audience. The schools, hospitals, homes, Bungalows were all shot in Pitch Perfect locations in Ether Dehradun or Kashmir. Every character in this movie looks so immaculate.
Reminding us of hybrid veggies sold in grocery stores. Earlier Place, Shania was fashion-obsessed under introductory scene reminds you of Disney princess character who can shop anything and everything under the sun. Siddharth Malhotra who Plays Abhimanyu Singh becomes a good friend of Rohan Nanda played by Varun Dhawan within no time. So the girls in this film are either Skadi ruthless Sarlacc intelligence.
The men hugging As each other if they are gay or not? There are innumerable close-up shots of so much male eye candy here that you get tired of it. Plus Rippling six-pack abs, shaved chest, boys are hoisting their wet bodies out of the swimming pools or acting out in a gym in slow-motion. The one scene which is shot in Thailand shows Malhotra and Alia Bhatt emerging from the ocean in Ultra slow motion. Karan's camera is capturing every drop of seawater as it courses slowly down there smooth skin. Remember, this is all Karan johar's version of high school kids who have not even reached the age of 18.
Unfortunately, there are kids in India who take this character seriously and might develop an extreme inferiority complex after watching such movies. Later, Rishi Kapoor, he is a talented actor of extraordinary range. Still, here he embarrasses himself in the role of college Headmaster Yogendra Vashishth overpaying an unmarried single man with a propensity for wearing pink and purple polka-dotted neckties. His characterisation reminded me of Karan himself with the crass sense of humour used to define his character was a disgrace to the LGBT community in general. Many seasoned reviewers gifted 4 out of 5 for this movie making an exception for special Karan claiming that he creates this Exquisite and pretty looking world. So, you don't need any other proof to say that paid media is a reality.
Friends as an in this article, in case of all the movies I discussed excluding student of the year The Creator had real stories to tell, as many of them had first-hand experience going through similar Journeys in schools and colleges. For this reason, those movies are relatable, and there are so many subplots that hit the right chord of the audience. Now Karan johar's student world is cooked up. As he was brought up in an elitist way, and he is possibly never bothered to research what a typical student in India goes through to become whatever he or she becomes.
Friends, I covered few movies that I was aware of, but I'm sure I met a miss some other good films in various Regional languages based on the student life and would welcome your feedback and comments on those. Thank you very much friends, and don't forget to Follow.
Shares
NEXT ARTICLE Next Post
PREVIOUS ARTICLE Previous Post
NEXT ARTICLE Next Post
PREVIOUS ARTICLE Previous Post

Hi all, welcome to ReporterBuzz.in. Today, I wanted to discuss a topic tha…